We would be glad to compare your experience and case histories, and include them on this site. Contact us. 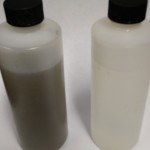 No treatment was run into a cooling tower for many months, or more when RTA Water Treatment started with the account. Top tower pans had calcium carbonate scale of 1/4″ or more and was totally covered with the scale. 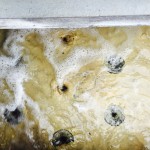 Top tower pan before cleaning.  Proper cleaning chemicals and ongoing treatment made significant improvement in less than one month.